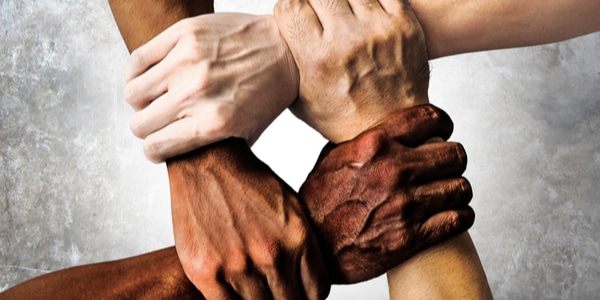 Would we adopt a coloured child? Would we allow our sons or daughters to have a mixed marriage? Would you allow a person that is culturally different to you to lead you at a communal level?

A lot of us might answer yes immediately but deep down our stomachs may be churning. The topical aspect of racism, whilst staring at us in the face, is an age-old disease that has permeated into societies across the world.

One does not need to point fingers as we are all guilty of it in some form or the other.

As a label, it seems and feels wrong. However, the systemic indoctrination of such biases, deliberately or inadvertently from when we are children lends to our psyche accepting it without realizing it as so, until it is too late.

Racism is the belief that personality, behaviour and morals can be traced back to race, and the belief that one race is superior to another. In the case of discrimination, the issue becomes one of acting on racist thoughts.

Thus, discrimination is racism made real. A racist person’s tendency mirrors itself in his or her behaviour towards others who display a certain trait, behaviour or standing that goes against a perceived notion of equality.

As a “brown” child growing up in Africa, it was drummed into me by the “educated” as well as the “white” person of my inadequacy via books and the education system. Strangely a lot of us fell into the trap to the extent of not only believing it but adjusting ourselves to culturally fit into an acceptable norm. This led to us trying to find a middle ground to fit culturally and yet be seen as “progressive”. The offshoot of this led to something we know to be true, but avoid talking about. Multiple personalities! One for the home, one for the place of worship, one for friends and another one for work. This led to added stress and a dissolution of the real self.

As some of us reach the twilight years of life, and ponder, we learn to be a lot more truthful to ourselves. Today when I put the mirror up, my reflection tells me that whilst I have tried to be very equitable with all and have never looked down on others based on their colour, there have definitely been times when I have faltered and looked down on certain people. To be truthful, I have in some instances looked down on others in my younger self due to their lack of intellect, being sometime self-righteous of those who within my own faith did not conform with the prescribed way of worship, or those who do not kowtow to certain cleanliness standards etc. Quite unhappy with myself for this!

When one examines how racism comes about, it is quite subtle as it is inculcated within our systems and culture. Unlike the colonial times, when it was done via the use of force and provision of “goodies”, today the subtlety of approach is quite sophisticated. Nowadays, we are shown up against each other and we end up destroying ourselves.

What is interesting is that the old adage of divide and conquer still permeates within our societies. Systemic myths were created on colour, economic and social lines. Systems were created to ensure conformance. This systemic racism became so common that it became enshrined in culture.

I have personally seen people beat this age-old disease and unfortunately it is not a pill prescribed over the counter that acts really fast. It ideally needs to be managed like one would manage a long-term strategy. The strategy is three-pronged. It needs to be managed at:

The way kids are born to be “racially ignorant”, is how we as parents need to continuously raise them. Unfortunately, the negative in-bred experiences we have had as parents embed themselves into our children’s’ psyche knowingly or unknowingly.

Thus, it is imperative to be extremely conscientious at every step of the way first and foremost as individuals and then with our loved ones.

Psychologists suggest that for someone to change dramatically, the amygdala in the brain needs to experience a life-changing intervention like a near-death experience for it to be impactful. So, when we ourselves face being discriminated against; we chose to voice out against it and yet are oblivious to our own shortcomings. And when reality kicks in and we realize we are now the supposed “second class citizens”, you will have the amygdala attack.

At this stage, you realize the wisdom of leading a purpose-driven life wherein you live life on purpose and are cognizant of how everything you do and say impacts you and those around you.

When it comes to a communal approach, we need to remember that one or two bad experiences with a particular race does not taint the whole.

This list is endless and encompasses the whole globe. As hard as it is to live with these mental images, some live through it day in and day out. If there is anyone who claims that racism does not exist in their own minds or their own society is lying to themselves, including me. However, what is wrong to for us to taint the whole country, creed, caste as being guilty. It is sweeping statements like these that lays the foundation of inherent racism.

In today’s world, it is easier to deal with inherent racism as the channels available to us are immense if used correctly. In the past, it was passed down from generation to generation. Today, one’s blog, article or musings on YouTube, Facebook, LinkedIn, Twitter, Instagram or Snapchat can allow for a decent exchange of conversation and thus potentially start a line of evolutionary thinking via an ‘aha’ moment.

The challenging and key part of having these difficult conversations is the art of having an exchange of information (argument) that does not descend into a rant.

Those that are guided give us a very lucid and logical way of having an argument. It goes like this;

The last part of the management of racism, is for it to be managed at the federal and/or governmental level. At this juncture, I wish to introduce a beautiful African proverb, which says, “when the fish rots, the head rots first”. Basically, this is the crux of winning the battle at this level. The leaders at the helm need to be selected on very strict criteria that shows them up to be emotionally intelligent and conscientious people who genuinely care about all their people and humanity as a whole.

Once you have identified the correct leaders, one needs to ensure you have the right systems and processes in place to ensure that the checks and balances are catered for.

The last part of the jigsaw puzzle is for the collective, the people to uphold the principles of oneness irrespective of the discrimination. This means for all of us to hold ourselves accountable whereby we police our thoughts, our words and actions.

What does this mean for us as individuals? We discussed solving the disease at three different levels. However, for an individual or a society to tackle this disease, there are certain behavioural aspects that are critical at the individual level. These are:

So, can Racism be solved? Absolutely!

Let me end with the questions I posed at the outset. Choices are not wrong or right; what matters is the intention behind the choice. If you do not wish to be in a mixed marriage because of the colour of one’s skin, then your intention is flawed. If your reason is based on compatibility, then you have the start of the makings of a sound decision. Unfortunately, it does not end there. Sometimes our intention of compatibility permeates from past experiences of potentially a failed mixed marriage. There your intention becomes clouded by tainting everyone with the same undertone – which again moves one into the racist realm.

Man has been blessed with intellect as the best of the Creator’s species. If you chose to raise your children exactly how you were raised by your parents, you then negate your God-given gift of learning and evolving. It doesn’t necessarily make you a better person than your parents or forefathers. I prefer to look at this and ask, “Are we happier than our parents and forefathers?” the answer should tell it all.

As human beings, we live in hope for humankind to actually discover their true purpose in life. We all can learn to live in harmony, love and accept each other. The inner strength to accept the unknown with bravado and enthusiasm will enable you to overcome the fear that one associates with the unknown. As the world grapples with racism, we can no longer pretend it doesn’t exist, but must take these baby steps to find solutions to our individual biases –before it becomes too late for the world and descend into chaos. It is all about building trust with someone unlike you, or even like you. It can be an exhilarating journey, should you be willing to take the first step. Will you?